Once a year, the team at Turn 5 takes part in something truly special. The AmericanMuscle car show, a show that has grown from a cozy 500 car Mustang gathering planted smack dab on AM’s HQ into a 3300+ Mustang Right of Passage.

The community consistently turns out dozens of Mustang clubs and enthusiast groups each year at what has become the largest Mustang car show in the world, hosted yearly at Maple Grove Raceway in Mohnton, PA. Every Mustang imaginable can be found throughout the seemingly endless maze of Mustangs, as well as the occasional Ford GT or AC Cobra kit car.

And every year, a different charity is chosen as the reason for having the show. For many Turn 5 employees, this is the highlight of the year. What has become essential to the show but hardly overlooked is the high percentage turnout of AM natives to work the tents, help park the cars and make a show of such magnitude run smoothly. 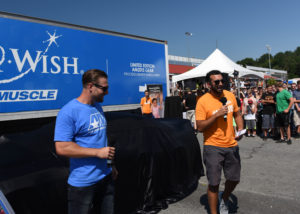 The reward is a community strengthening event that entertains the whole family while benefiting others through the funds raised for charity. To date, the AM car show has raised a total of almost $100,000 for the following organizations:

With each passing year, AmericanMuscle’s goal remains consistent: to raise more support for charity while building on and further strengthening the culture everyone has come to know quite well over the years. With nearly $100,000 raised so far, the bar gets set higher each year. While the shows of the past were great, AM is already looking forward to the next one: